skip to main | skip to sidebar

The trip to Churchill

The first day and a half were spent getting to Churchill. Left out of North Carolina around 7:00 and with a layover at O'Hare I arrived in Winnipeg (bottom) around 3:00 local time.
I was told the airport hotel was right across the street from the airport but I had no idea just how close the two are to each other. This is a view from my room (top)
The next morning I was up early and on to Churchill! Notice in this photo (top) how some of the tributaries are beginning to freeze.
We made a quick stop in Thompson (bottom) for fuel.

Posted by Valerie at 5:49 PM No comments:

In November 2010 I was invited to Churchill Manitoba to see and photograph polar bears (Ursus maritimus) in the wild.
As these bears are my favorite this was indeed a thrill of a lifetime!
In the coming months I will share photos and memories of this trip and try to bring my experience to you.
It is important to understand why these bears are so much in peril and what we as humans can do to help. When climate change gets so bad that the ice is not forming until late December, early January and melting earlier then ever, it is an alarming event. On the surface it means the bears get less and less time to hunt on the ice pack. It also means fewer bears and fewer cubs which could have potentially devastating effects on one of the world's largest populations of polar bears.
Posted by Valerie at 7:01 PM No comments:

An opinion
Zoo's... good, bad, love them, or hate them, people seem to have strong opinions about zoos.

The benefits of accredited zoos are many. They introduce people to a concept of our natural world and try to teach us what it will take to save our planet.

Most zoos today are nothing like the zoos of old. Zoo's that are accredited have the animals welfare in mind. A good example of this is when the North Carolina Zoo needed to get the sealions in water, while their exhibit was being repaired, they gave them the polar bear exhibit. Even though the bears are the most popular animal, they took them off exhibit to give it to the sealions!

There are many programs in zoos that are re-introducing species who's population have either become dangerously threatened or extinct in their native land.
Several Zoos are working closely to protect species. The North Carolina Zoo is working with Cameroon, helping to protect and increase the elephant population. The NC Zoo, along with several other zoos, rescued their polar bears. These bears were confiscated from a traveling circus in Puerto Rico. The circus was from Mexico City. They were kept in very small cages except when they were forced to perform, often times in 100+ degree heat. They rarely had access to water, either to drink or for swimming.

Most reputable zoos only acquire endangered or threatened species to exhibit from other zoos. They are working on a sustainable population of these animals which will keep them from being taken from the wild.

Knowing that, it still doesn't take away the fact that zoo animals are in captivity and are limited. But a captivity that is improving all the time. Exhibits are now being built to suit the animals first and then the visitor. They have a great healthcare plan, and meals they don't have to hunt.
I like to view them as Ambassadors of their species.

I know if it weren't for zoos, I would probably never have become involved financially nor given my time to help support and save our planet! Over 150,000 children come to the NC Zoo each year. If each child takes away just one lesson, maybe our future and our planet will be better.

(I am transferring this from my Flickr profile page and setting up a link)
Posted by Valerie at 9:05 AM No comments:

I have attempted 3 planned trips to Chicago and they were all canceled for one reason or another, so this time I planned a quick day trip to Brookfield Zoo.
I didn't tell anyone except a friend I was meeting there.
The zoo grounds are very impressive! Some of the exhibits weren't state of the art but they are trying to improve. There are new bear exhibits being built and some modifications to others. They have an excellent collection of animals!
I really enjoyed the bears and cats also the primates. This is the zoo where the little boy fell in the gorilla pit a few years back and the female protected him and dragged him to the keepers door!
On another note, if you get the chance to fly SouthWest, DO IT! They have a great sense of humour and it makes for a better flight then stodgy old school airlines!
Posted by Valerie at 7:00 AM No comments: 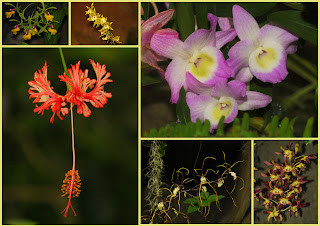 Since moving all the animals out of the African Pavilion they have set up this beautiful display of orchids. There are to be 2 more collections shown this year. Definitely worth going to the Pavilion to see!
Posted by Valerie at 6:23 AM No comments:

EVERY day is a good zoo day! 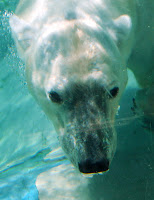 So I get to the zoo Monday and decide to basically head straight for the African exhibits. As I walked by the North American exhibits I did stick my nose in but alas, they were all laying about or hiding! I did find this beautiful flower near the Prairie exhibits!
When I arrived in Africa I was hoping to find the lions active but they too were asleep. I continued down towards ZOG (zebra, ostrich, giraffe) to see what was happening. The zebras and ostriches were grazing and all the giraffes were at the upper end, near the new feeding station keeping their distance! As I made my way around to the lower elephant exhibit. I was hoping to see them in their new pool. I have yet to have the pleasure but I have been assured they do get in and enjoy! So I made my way to the upper exhibit and what did I find?? A mom and baby enjoying a splashing good time! It was really a delight to see and I spent a good 45 minutes watching them enjoying it! For more photos please visit my Flickr site: http://www.flickr.com/photos/ucumari/
As the heat of the day drew upon us I decided to catch a tram back to North America and run by and see if Aquila had made his way into the water. As I approached I could tell he was entertaining the visitors. I heard shrieks of delight coming from his direction! When I got there I saw a crowd at his overlook, he was in swimming and having a great time! I went to the lower viewing area and it was packed! Aquila was swimming up to the window and pushing off just like Willy must have taught him! It was a delight for all that were there. By this time it was getting very crowded and very hot so it was time for me to make my way home!
Can't wait until next visit!
Posted by Valerie at 8:51 AM No comments: 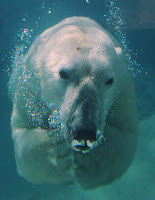 I miss Willy swimming about in his exhibit. Hopefully in about a month he will be back enjoying his pool! Keepers tell me he is responding better then expected and should be ready by the end of May, beginning of June.
I sure hope so...
I remember when Willy and Masha first came to the NC Zoo, I was a bit put off that Aquila would have to move. He had gone through a lot with losing both a brother and a sister. Now ironically I'm a bit put off that Willy will have to rotate with Aquila. You know what they say, you can please some of the people some of the time, but heck when I can't be pleased any of the time what chances are there? Lol!
Posted by Valerie at 8:52 PM No comments:

Valerie
I have been volunteering at the North Carolina Zoo since 1996 and have loved every minute of it. I have met so many wonderful people and of course wonderful animals! I have been very fortunate to be published in many different media. I have had full page layouts of Willy the Polar Bear in the London Sun and the National Examiner. I have had photos used in magazines worldwide and too many blogs to keep track. I even had some used on recyclable notebooks. I am semi retired from 23 years in the newspaper business - a dying industry